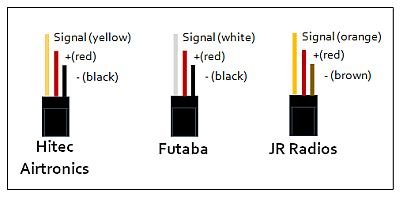 Wiring
Servo motors are widely used in robotics and there are different types from different manufacturers. The difference between those types is often the use of materials and is reflected in the price.

The servos have different connectors, but are basically always the same principle. 2 wires for power and one signal line. Black or brown for neutral and red for power. The signal line has different colors. (see picture below) 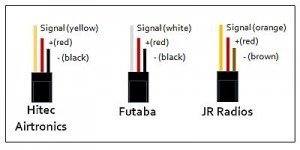 The servo will not work if it is connected the wrong way, but will not break.

Servo’s used in hobby robotics are controlled with a pulse train. This pulse train exist of a pulse duration with a length of 0.9 mSec until 1.9 mSec in case of a Hitec HSR-5995TG servo for the whole 180 degree. This may vary between different manufactures and models. Between those pulses there is a delay. The exact timing of this delay is not very important but is typical from 2.5 mSec till 20 mSec.

Basic stamp example
To experiment with the Hitec HSR-5995TG servo I wrote a little Basic stamp program to show the movement of the servo.
The program below has two servos turn their 180 degree angle infinite. It has a 20 mSec pause between the pulses. The PULSOUT value is multiplied by 2 mSec. In this case the center position has a value of 750 (1500 ֓mSc)