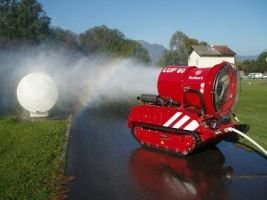 Fire fighting is a dangerous job and a lot of brave men are dying every year. To save lives a firefighting robot should take its place in a fire department. Send a robot in if a building is going to collapse or think of big chemical fires with a log of heat and not so healthy gases. What about the danger of explosions or small spaces.

Time to find out what the possibilities are at the moment. I thought a lot of robots should be available now but I had a hard time to find a some on the Internet. Could be my mistake of course, but there aren’t a lot of these machines right now.

The robots
The first I found was the SACI from ARMTEC. I thought this was a simple machine, but it was developed in 2004 in Brazil. Just connect a hose, drive the robot to the fire and aim the nozzle.
http://v2.armtecbrasil.com/

In the Austria they make a more modern fire fighter robot. It has a big fan and makes “water beam” fog. The purpose is to make the fire less intense and let fire fighters do their job more safely. The price is about 150.000 EUR.

The Firemote™ is an robot fitted with a fire-fighting nozzle from Ryland Research Limited. It looks like an experimental robot, but according to the website you can have it in 20 weeks. There is also a smaller version.
http://www.rylandresearch.co.uk/unmanned-vehicles/firemote

If you see the few examples on this page, you can say there is a long way to go. I expected a lot of companies to jump in this business. There are experimental robots, but only a few are mature enough to put in real action.