While printing the inMoov robot I made some progress on BOB the Biped. This is an open source project build by K.Biagini. You can find it at http://www.instructables.com/id/BoBtheBiPed/

To build BOB you have to print 6 parts on a 3D printer. BOB has four servo’s. Two for each leg and is powered by 4 AAA sized batteries.

Printing the parts
BOB has only 6 parts. The base plate, the head, two brackets and two foots. I used a Ultimaker printer to make the parts and took a day to print. I am planning to make two of them. One red and one pink. I have two daughters. The parts have a tight fit so you need to sand it down a bit. 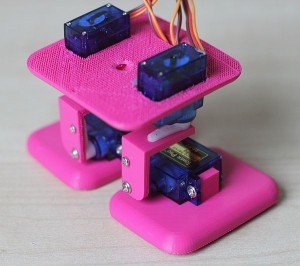 Mounting the parts
I used small servo’s from Tower Pro. There are three screws in the package. I used two to mount the servo lever to the L-shaped bracket. The four spare screws from the four servo’s are used for mounting the two servo’s on the feet. I used hot glue to fix the servo’s to the base plate. 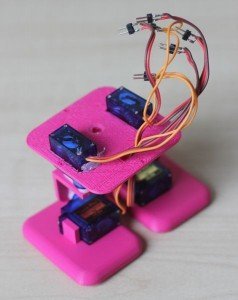 As you can see on the photo, I soldered a 3 pin connector on the wires of the servos.